WORD OF THE WEEK

I am, as you may know, going away, far far away. I may be some time. Well, to be honest, I will only be four days, but it will seem like a long time to me. I have pledged to leave my laptop behind. But he doesn't know I'm sneaking a pen and paper into the suitcase. What I expect to do with that, goodness knows, but it's worth a try.

Anyway, I said I'd give you an activity to keep your brains alert. And I will. But don't scroll down to the end of the post. Read the "learning" first. Remember how you had to eat your greens before you got your dessert? Well, this is not very much like that.

All writers like to play with words. We like the sound of them and the feel of them in our mouths and what they do to the minds and hearts of the reader. Writers can have conversations about the beauty of words in the same way that other people can go gooey-eyed over the gorgeousness of scart leads.

One of my favourite words is one I don't often get the chance to use. It's "hapax legomenon." (OK, two words.) And it describes any word which has only ever "once" (hapax) been "read" (legomenon, obviously). So, it's a word that has only ever appeared once in the whole history of literature. Trouble is, as soon as you then write that down in order to comment on it and discuss its position in the cannon, it's not hapax any more, is it? Don't suppose they thought of that when they started talking about hapax legomena. "Oooh, electricity - there's one! Oops, now it's gone ...."

Anyway, let's not be pedantic. Let's say that a hapax thingy could (should) also mean a word which was at one time "once read" until some aspiring writer spoilt its uniqueness by writing it again and then damned well getting published so someone else could read it for the second time.

If you invented a word, it woud be a hapax legomenon until someone else used it.

Well, I invented one yesterday. It was while I was gardening, or, to be precise, while I was gazing in admiration at the results of my gardening. See, I have a very small garden but I like to do my bit for the environment so I had been planting lettuces and beans and things in pots, so that, come the sun, I'd be in, if not clover, then at least lettuce.

You need to see it before I go on: 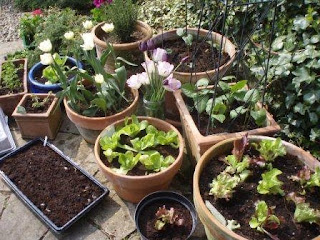 Isn't it cute? Sorry about the tulips, which are clearly not edible, but I thought the lettuces needed something to inspire them. To model good behaviour, so to speak.

Then came my inspirational word invention. See, there I was gazing at my tiny collection of pots, leaning on my fork, and thinking to myself, that's not so much an allotment as ....

Now this word is, quite literally, a hapax legomenon. At the moment. And, as I am sure you will agree, it should exist, so I'd like you to help me raise it from its hapaxity (woah! another one!) and take it into common usage. I want to be remembered for something more than just being the first Google result for "crabbit old bat". Please.

But that's not your main task. Oh no.
Your main task (and there's no prize or nasty judging or anything divisive and time-consuming, because I'm going to be up to my eyes in things when I get back from the sunny north) is to share with all of us your own invented words. Words that damned well should exist. And if we like them, we will all go out there and take them into common usage.

Go on - think of your legacy!

All your words in the comments box, please. If you can't think of any new words, entertain us with your favourite existing words - if you speak about them interestingly, we'll get to love them too. Go on, inspire us! And if they're really unusual words that we might not have heard of, you'll have educated us too. Goodness me: "inspire, educate and entertain"? We'll be turning into the BBC soon ...

Meanwhile, here is my own personal Cerberus. 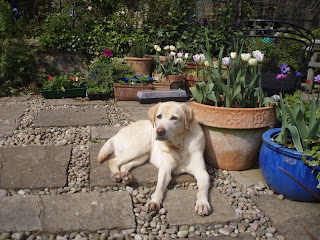