CLUES ABOUT THAT COVERING LETTER 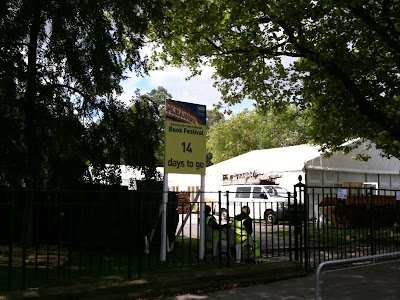 Yesterday, while you were all frantically trying to find ways to criticise my near-perfect covering letter without offending me by criticising my near-perfect covering letter, I was in town buying SHOES. Because, with 14 days till the start of the Edinburgh Book Festival, things were close to a panic situation. I can't show you the shoes (there's a news blackout) but I can show you the beginning of the tents going up.

Meanwhile, I thought we'd stay on the topic of covering letters and I'd answer a few of the uncertainties in your attempts to guess what my agent thought could be improved about the letter. (If you've just come to this and haven't read the letter and the attached competition, please do now.)

Meanwhile meanwhile, I should also say that one person has guessed one of the two imperfections correctly. I'm not saying who, but I will say that this person has identified the one sentence that isn't quite strong enough.

So, a few points raised by you, in no particular order:
There's a load more I could comment on but I think that's enough. In fact, it's probably too much. Anyway, keep the comments coming, either on this post or the competition one - I'll consider them all for the competition anyway. Deadline is Aug 14th and the results will go up in a definitive post about perfect covering letters on Aug 22nd, the day I'm doing the workshop. The workshop is 2pm (GMT) so Ill schedule the post for that moment, and you can all think of us having fun in our tent! With chocolate!

LATER ...
I am now down from my mountain. Here was the view from the top, looking over Edinburgh and the Firth of Forth. The fact that I now have no power left in my legs is entirely beside the point. And there is my dog, looking rightly proud. Though in true dog fashion she has her back turned to the view, as she has no appreciation of anything that doesn't taste like food. 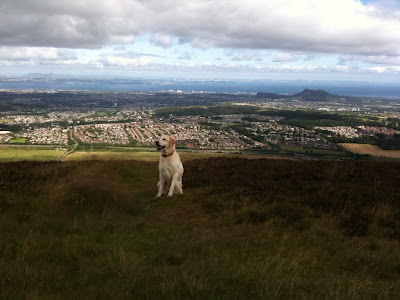 Maybe I should have enclosed a picture of her in my covering letter?