I do have a habit of doing mad things. Frequently I regret it. Usually in the middle of the night. I once took a test to see whether I was a risk-taker. I scored pathetically on the type of risk which involves physical danger - like sitting by a window when at any moment a pigeon might come crashing through - but impressively bravely on "new experience-seeking".

If there was a category for "things no sane person would do but which aren't actually even a teensy bit dangerous" that would be my type of risk.

So, doing a NaNoWriMo is pretty much in that category. (A Nanothingy, btw, is where a group of idiot writers decide to write 50,000 words in a month. You're meant to do it while having a normal working life, though you will not be normal by the end of it.)

I am fascinated by several aspects but I'll share just three with you. And I'm going to be briefish because a) my posts are often too long (though none of you has been cruel enough to tell me so) and b) I've, er, got 5,000 words to write tonight.

1. Changing your writing habits is a good thing
We get into ruts. People ask writers things like "Where do you write?" or "When do you write?" and we have answers. We shouldn't have answers. Whatever your answer is now, why not change it? Our brains are wired to love change. They get excited by it, pumping out dopamine, the chemical that makes us learn, and live, and love to live and learn. This week, I've changed. I was a keyboard-addicted-email-addicted-writing-is-a-last resort-can't-write-unless-I've-vacuumed-the-dog kind of a writer, but I'm now a writer who can write With A Pen On Paper, in the garden, in a coffee shop, on a bus with yackety people around me; I'm a writer who writes first and does tasks later. This is a revelation.

2. "No Plot? No Problem!" - the book by the founder of Nanowrimo, Chris Baty - is a must-read for authors. I rarely say that anything is a must-read, but this is. If you don't find something in it that excites or challenges or improves you, I'll eat my novel. I've never read a book about how to write a novel and never wanted to, but this is a totally different book about how to write a novel - it shows you how to write your novel, not how novels are written or what to put in them. Everything from time management made sexy (que?) to how to bribe, terrify or blackmail yourself or your friends into writing is covered.

3. The important thing is to turn off your internal editor. As Baty says, "The first law of exuberant imperfection is essentially this: the quickest, easiest way to produce something beautiful and lasting is to risk making something horribly crappy." You're just supposed to write, get that first draft down, and allow it to be substandard. For me, it's hard not to re-write every sentence five times before going on to the next one. But it feels so much better to get some kind of flow and I used to be able to - I'm just getting it back, that freedom to write rubbish and deal with it later.

The way Nanowrimo works is that you all encourage each other. Or threaten, bribe, goad, jeer at or otherwise abuse each other. On Saturday, one of the participants and I were being silly on Facebook - "bet you can't" / "oh yes, I can" / "I'll raise you 5,000" / "losER" and in the end we challenged each other to write 10,000 words on Sunday. I woke up on Sunday with a migraine and she had a serious hangover (shame on you, Gillian ...) but we were both at our desks. (Yes, OK, I see this isn't sounding attractive.) And we wrote, oh boy did we write. Neither of us reached 10,000 - well, I could have, of course, but I felt sorry for her with her hangover, so I generously eased up and took another couple of codeine. But none of our several thousand words would have been written if we hadn't been doing this. Which feels pretty good.

Writing a novel is hard. Writing it with other people pushing and encouraging you is a whole lot easier. I recommend it. You don't have to wait for the official Nanowrimo to start - get a group of friends together online and just do it. Go to the website here for everything you need to start one. Or do a smaller challenge - anything to break whatever habits might be holding you back. (And you'll never know till you try.)

And even if you don't do anything vaguely Nanoesque, do remember: 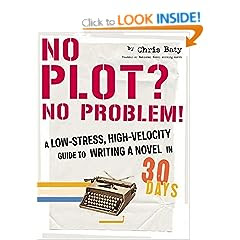 Mind you, I have only done a week. In another three, I could be a wreck. I could really regret this whole post and be cursing the day Chris Baty ever decided not to be a normal person doing a normal job.

But at least I took the risk.