CAN YOU LEARN TO WRITE?

WARNINGS:
a) this is a big one: get coffee and some of your Easter chocolate
b) there are very few bits of coloured font. You'll discover why soon.

So. Learning to write?

Thomas Huxley first posed the monkeys and typewriters thing - that if enough monkeys tapped at enough typewriters for long enough, you’d eventually get Psalm 23. In 2003, scientists at Paignton Zoo in Devon gave six monkeys six weeks to come up with the goods and at the end of it were presented with mostly the letter S. Nothing even approaching a small word. Though I suppose S is one third of the word She, which is the first word of Henry James' The Wings of a Dove, so they were getting there.

OK, so the scientists weren’t trying to teach them to write - they were trying to show the difference between machines and animals. As the project designer said, “The monkeys aren't reducible to a random process. They get bored and they shit on the keyboard rather than type." Which real authors would never do. Another similarity with real writers: distractions. "There's loads of stuff for them to do in there, they've got climbing frames, ropes and toys." See, even monkeys do Work Avoidance Strategies.

Now, I know, you’re jumping up and down wanting to point out the obvious flaw in this as an experiment: the researchers should have kept half the monkeys there crapping on keyboards and sent the other half on a Creative Writing MA. Then we’d have seen some serious creativity going on. We could easily have got some Ts and Bs along with the Ss.

OK, we haven’t got all day to monkey around so let’s get to the point. Can you teach someone (human) to write? As in not just spell and stuff but really be a writer. If so, what can you and what can’t you teach?

There are plenty of books and courses out there, and plenty of people going on them, so a lot of people think you can. But aspiring writers should be very careful not to infer from this that a course (of any sort) can turn a non-writer into a writer. Unless by writer you mean someone who can do no more than pen some crappy saccharine greeting card fodder. Which you don’t.

I’ve been thinking about this a lot recently, partly because I’m involved in an event at the Edinburgh International Book Festival (sorry, have to use full EIBF title - corporate branding blahdy blah) called Monkeys and Typewriters, in which we’re going to discuss this. And I have a good friend, Sam Kelly, who’s heading up a brand new Creative Writing MA at Edinburgh Napier University. And I used to be an English teacher, during which time I attempted to teach some little monkeys to write. Moreover, I was recently contemplating (until sanity returned) offering an online tuition course.

So, do I think you can be taught to write? In a monkey-nutshell or three:

What do I mean by “required talent”?
The bit you can’t teach. You’ve got it or you haven’t. It includes inspiration, originality, imagination and the desire to write. If you could invent a talent detector, it would analyse neural activity at that moment when the idea in your head transmogrifies into the words your brain comes up with to express that idea; before the internal editor is kicked into gear. Give a hundred people a topic and ask them to write thirty words about it (which I am about to do to you ... Be patient, please) and you’ll get a hundred different responses, and not just different in small details - what went on in the head of each person as they came up with the chosen words is the mysterious bit that can’t be taught. In a way, all that can be taught is the subsequent editing of those words by the writer. (And then how to take them to market.)

So, I am saying that a course can teach you to self-edit. Which is a damned fine thing and a very good raison d’étre for good courses.

I asked Sam Kelly (Edinburgh Napier CW MA - pay attention at the back, please) to give a couple of aspects of a writer's craft that she thinks can and can't be taught. “The key term here is 'craft' …. Craft, in any area, is the set of practical skills that you can acquire. Everything else is what you can’t teach: talent, originality, energy, commitment, intellect, etc, etc. But seedling talent can certainly be grown, through the judicious application of challenge and encouragement." (I said “couple”, Sam - see, she can write but she can’t read. Like a lot of writers …)

I agree, apart from the seedling bit. I think you need something a lot less weedy than a seedling to start off with if you want to grow into any kind of half-decent tree. And the bigger and stronger the seedling at the start of the course, the mightier the resulting oak. Sam told me “We want students to come up with amazing original ideas and be able to write brilliantly.” Quite, and you don’t get amazing original ideas from just anyone, nor can you teach just anyone to have amazing original ideas. Forget seedlings, Ms Kelly - I’d say the Edinburgh Napier MA is certainly looking for pretty damned sturdy saplings for its course.

One interesting USP of the Edinburgh Napier course is that it is “replacing the traditional workshop with one-to-one mentoring, because we believe this is the most effective way to develop individual talent.” That will be interesting to those of you in critique groups. I’ve long shuddered about the advice sometimes given by unpublished writers to other unpublished writers. (See Jane Smith’s excellent piece here). It’s too difficult to be professionally and constructively critical, when a) you haven’t proved that you’re not making lots of mistakes yourself b) you know that the person may be upset and c) you know that that upset person has also got to critique you.

My own preference (and this is really personal preference, though the bit after the "and" also constitutes advice), would be for one-to-one mentoring by a professional, and I’d want it to be someone who’d had proven knowledge and success, as an editor, agent or relevantly published and respected author. But I wouldn’t believe everything I was told - I’d constantly critique the critique too. (God, I'd be annoying ...)

For those of you contemplating critique groups or writers' group workshoppy things, (and yes, of course there are good ones, and some very good ones) first read this.

As for other writing courses, obviously there are good examples at all levels - Daniel Blythe teaches one. (I mention it because a) I’ve heard good things about it and b) he’s probably reading this post. Oh, and c) he says sensible things and earns a living as an author so he knows what he’s talking about). Always check the credentials of the people teaching you and remember that no course will make you a writer if you don’t have the talent already.

I asked Sam what she thought were the greatest misconceptions about MA courses. (And her answer equally applies to other types of course, imo). “The most grievous delusion is that it will make you a writer. It won’t – it will make you someone who’s been on a course. If you have talent, choose the right course, and use the opportunity wisely, then what you learn on an MA programme can definitely increase your chances of success out there in the world. But there are no shortcuts: you still need to work on your writing for as long as it takes.” How true. And you noticed, I hope, the phrase “If you have talent” …

Talent is the sine qua non and there’s no course on earth can teach it to you. Please write out 100 times.

But a course is not the only way to learn the necessary skills. You can also learn from:
Now, that was a long (and almost colourless - thanks, Tom - she ungrits her teeth with difficulty) post so I’m rewarding you with a COMPETITION. Remember I talked about that moment between the idea and the writer’s brain coming up with the words to express the idea, and how the (teachable) internal editor would trot along afterwards to hone the editing of the words? And I said that 100 people given a small writing task would all come up with different words and approaches?

Well, let’s do it.
By lucky chance, while I was writing this post, I nearly had a heart attack. Honestly. Thing is, a pigeon exploded through my window. Lightning may not strike twice in the same place, but clearly pigeons do: this is the second time this has happened to me while writing erudite stuff in the last few months. (See my other blog, Ghostlygalleon). They never come crashing through the window when I'm out, only when I'm sitting trying to work. It's the magnetism of my writing, clearly. Either that or I smell like birdseed.

Anyway, so, a few minutes ago, this exocet pigeon attacked again. (Not the same one - the first one died.) It’s remarkable that you didn’t even notice, but such is the extent of my self-control. Such is the degree of my husband’s self-control that he came padding through in bare feet - funny, I never had him down as one of those glass-walking transcendental meditators but he is a man of many talents - and said, “Take a photo and use it as an inspirational creative writing task on your blog.” Excellent idea, young man. He now wants to enter the competition but I think I’ll get him to judge it. Much fairer. And less chance of marital discord.

The prize? Er, sorry but it’s a copy of my next book, Deathwatch. Which, since it’s not published till June, only has one review, and modestly doesn’t permit etc. But you can probably find stuff about if you’re that interested.

Anyway, please study the photo below and write no more than thirty words inspired by it. I am going to give you no guidance at all, except to say that it must be in English. And you are supposed to be showing that unteachable talent, coupled with that teachable editing craft. 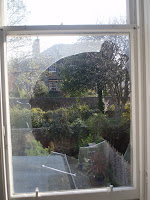 No emails - all answers in comment box. As many entries as you like. Feed off each other, be influenced or be genre-busting - up to you.

The deadline is whenever I decide. And then my husband will train his talent-detector on you. Once he's finished bandaging his feet.

Sorry for such a long (monochrome .... yeah yeah, one day I'll get over it) post - I promise my next two will be short, partly because I feel guilty about keeping you for so long and partly because I'm starting a NaNoWriMo tomorrow. Oh foolish woman. The point of a NaNoWriMo (apart from nothing) is to learn to switch off the internal editor. So today's post was my last supper of self-indulgence.

And finally, here’s Flannery O’Connor: "Everywhere I go I'm asked if I think university stifles writers. My opinion is that they don't stifle enough of them." Sorry, you probably wish someone had stifled me before I woke up today.