Today, we're going to look at my patent technique of method-writing. This means not actually writing at all but instead preparing by getting into the role and mind-set of a writer. After all, an athlete has to do all that training and buy the lycra and snazzy running shoes (which is the only reason they can run so ridiculously fast, trust me), so an author in training must behave in all ways like a professional author. In fact, being an author is very much like being an athlete, although you would not know that to look at most of us. But in our minds, oh! How sculpturously we are honed and toned! We are veritable Greek heroes of mentally muscular perfection. And we have terrific imaginations, too.

The first, and almost certainly most important, aspect of method-writing, is developing a full range of Work Avoidance Strategies (henceforward: WAS). I am delighted to tell you that you have already passed Level 1 of this technique, because you are reading this blog, and reading blogs (as well as writing blogs and posting eulogistic comments on them) is the important first stage.

Now, although I am not normally one to boast, I am officially ranked World Number One at WAS. I have won medals in all categories, not only in the standard classes of coffee-drinking, blogging, attention to emails (I won the Butch Cassidy Award for being fastest answerer in the west), shopping, and suddenly remembering phonecalls I have to make, but I have also, I am proud to say, won the Nobel Prize for Innovation in Work Avoidance Strategies after my propensity to vacuum behind the fridge on a daily basis. (I was given a supplementary citation after I took the dead mouse I found there to the vet, thus avoiding work for another hour while I waited for the vet to call my psychotherapist.)

I believe it was in recognition of this talent that yesterday I was given the wherewithal to take my excellence to a new level. It's all the fault of Vanessa Robertson, whom those of you who read the Fidra Blog will know. She and her husband, Malcolm, own the Children's Bookshop in Edinburgh, which is within spitting distance of my house, should I wish to spit on it, which I absolutely don't. (Vanessa is even scarier than I am, I'll have her know.) Anyway, recently, Vanessa and I were chatting about blogs (chatting about blogs is a very good Level 1 WAS which you can all try at home at any time, by the way) and she asked me how my stats were. I thought this was a bit of a personal question, but she quickly explained. My eyes lit up. This sounded very cool. So I tried to install a stat counter myself and was doing fine (it had taken at least half an hour when I should have been working, so this was good - bit like a warm-up for an athlete) but then I came to the word html and freaked, as I always do. Anyone who doesn't freak at the word html has Klingon blood. (By the way, did you know that there are more people in the world who speak Klingon than there are who speak Gallic? Also, that in the Klingon language Klingon language is tlhIngan Hol? It's amazing how educational a quick WAS-related trip to Wikipedia can be.))

"Don't worry," said Vanessa last Friday, when I told her about my dismal failure to install a stat counter. "Malcolm can do it. Come to the shop at 11.30 on Monday." Malcolm? I'd met Malcolm before and he seemed very normal. Surely the Klingons had not got him too?

Anyway, I had to wait the whole weekend in nail-biting anticipation of what I just knew was going to be the dreamiest new WAS toy ever. How could I work with that kind of excitement going on? I wouldn't be able to call myself a real author if I could block out such anticipation. It would be like waiting to hear whether I'd won the Carnegie Medal (not something I have ever experienced, but I have an imagination and day-dreaming is merely a Level 3 WAS).

Anyway. Yesterday came, as expected, and I went along to the shop and there was Malcolm, who showed remarkably few signs of Klingon blood. And ten minutes later there was my stat counter, on my blog. Malcolm showed me amazing things I could discover about you. Like which part of the world you are from. And how many seconds you looked at each page - yes, I know two of you only stayed three seconds and it hurt me, it really did. Have a heart, for goodness' sake - I'm a human being with human feelings. And remember, I know where you live. Or not exactly, I hasten to add, and I suppose "USA" is quite a big place - but I will search for you. (Actually, one person stayed zero seconds - how does that work?)

I can see which pages you looked at first and which were the most popular pages. And I can even see which words you put into the search engine to find my blog. Three people actually searched on "turquoise boots" - no, mine are not for sale, not for ready money or any other kind of money, not on ebay or anywhere.

Vanessa spoiled it all. Just when we were getting along so nicely AND I'd given her and Malcolm the second ever batch of my delicious new invention, Brain Bars(TM) (shameless plug alert: see my main website for Brain Cake(TM), as described in Know Your Brain). "I wonder if anyone searched on crabbit old bat?" she said.

"Don't be silly," I said. "You wouldn't find my blog if you searched for crabbit old bat."

Well, I regret to say that I just tried it (under the lame excuse of a WAS). And you do. It's the first (and second) result in Google. Mind you, the Fidra blog is third ...

Do I really have to go down in history as the first crabbit old bat on Google? Or could I achieve fame as the owner of these gorgeous turquoise boots, which are mine, all mine? 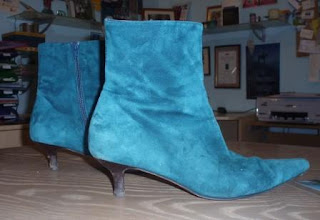 Is there a serious point to this post? Er, no. Except that you might want to consider the words of that other great time-waster, William Henry Davies, who wrote, "What is this life if, full of care, we have no time to stand and stare?" You have to take your hat off to those guys back in the old days: think how much better their writing would have been if they'd had stat counters instead of just having to rely on having something boring to stare at, like scenery or something. Amazing.

Hmmm, looking at those boots a bit more closely, I think they're a bit dirty. Better go and clean them.